A Contemplation of Mabon 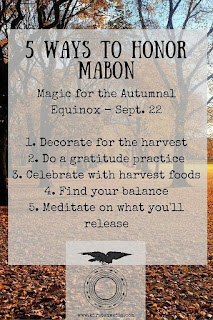 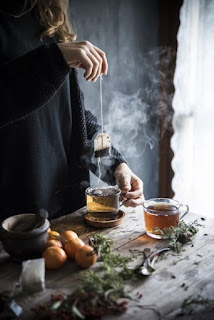 Steep a cup of tea and read about Mabon. 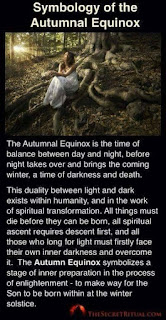 The cicadas are singing the swan song of summer, and she is beginning to dress for autumn.  The world is still mostly green, but every so often, a stiff breeze will shake loose a few golden leaves and blow them past me as a reminder that the wheel is turning.  Some people resist these days of waning at first, but that first cool night that creeps through my screen and into my bedroom lays an old familiar blanket on my skin and I’m comforted by her touch and her scent.  It’s the scent of tired leaves and ripened seedheads and longer shadows.  It’s the scent of grass cooled by the morning dew and the cedar chest from where I pulled my extra quilt.  She reminds me that summers never last, but they do indeed come around again after a period of much-needed rest.  After every period of expansion is a period of contraction, followed by another period of expansion, and so on.  Once you recognize the pattern, you’ll find its threads woven into everything; in the seasons, in our breath, in green and growing things, in the birthing of people, planets, stars, and ideas, in living, in dying.  It’s finding harmony in and engaging with this rhythm that brings me a great sense of security, connection, and enchantment.

On the Celtic wheel of the year, the festival of Mabon (which is actually a more modern name for the festival) coincides with the autumn equinox on September 22 (or somewhere thereabouts) and is the second of the three harvest festivals bookended by Lughnasadh on August 1 and Samhain on October 31.  This long, decadent stretch of late summer is often called a “fifth season”; we are not in high summer anymore but not quite settled into fall yet.  Things are being harvested and stores are being laid up for winter.  All of our hard work is coming to fruition and summer is full in our bellies.  I’m  eating the last of the tomatoes, and starting to think about what I’ll do differently in next year’s garden.  There is a business about it that can be overwhelming at times, but I know that it’s all about to come into balance.  That’s what an equinox is – a balance of night and day.  It’s a pause between breaths, the liminal space between heartbeats.  At Mabon, we are occupying the moment just before the exhale, balanced on the edge of the blade.  The light is noticeably turning towards darkness, seeds are falling to the earth to go dormant, and everything is preparing to rest and going inward to build up enough energy to begin the cycle again next year.

The story of the corn mother

In pre-industrialized, pre-Christianized Europe, it was believed that the female spirit of the grain lived in the fields with the crops.  Once all the crops were brought in, she no longer had a home, and so the last sheaves were reaped in ritual and used to make a corn dolly to embody and honor her spirit.  She was kept warm and safe in a place of honor in the home all winter, and in the coming spring, she would be tilled into the earth to infuse the new crop with her generous spirit of fertility.

In Celtic traditions, the female spirit of the divine cailleach (Gaelic for “hag”), the sacred ancient mother, lived in the harvest.  She is born anew each spring (or every hundred years in some stories) and matures with the seasons, renewing herself over and over again.  Some villages made a game of her corn dolly, kind of like “hot potato”.  The first farmer to get all his grains harvested would make a corn dolly from the last of his crop.  He’d then toss it into a neighbor’s field who hadn’t finished his harvest yet.  The corn dolly would get passed along until the last farmer to get all his crops in was stuck with her for the winter.  Some villages would dress the corn dolly to resemble the cailleach and burn her to honor the death of summer and thank her for the harvest. 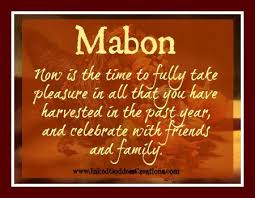 Debra She Who Seeks said…
I love corn dolly lore! Autumn Equinox blessings to you and yours, Joyce!
September 22, 2019 at 7:02 AM

Leanna said…
May the Goddess bless you and yours on this Autumnal Equinox.
September 22, 2019 at 8:45 AM

Christer. said…
I do like these old stories like the corn dolly. I don't think we had the same in the Norse beliefs though, must check that.

Guillaume said…
The equinox is actually tomorrow this year. But thank you for the info about Mabon. In the meantime, today was Hobbit Day as well, which is also kind of fitting.
September 22, 2019 at 3:52 PM