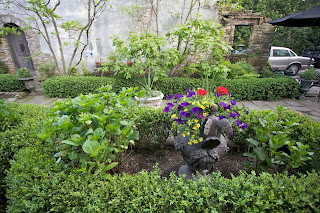 The spiral evergreens are history and the new planters are in their place.  Unfortunately, we did not realize that one of the trees had a birds nest in it.  Ugh!  We felt horrible so we propped the tree against the fence so the parent birds could still get to the nest and we are hoping for the best. 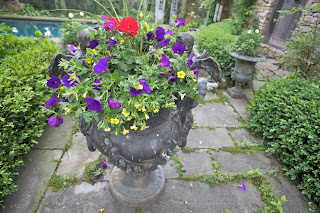 A closeup of one of the planters. 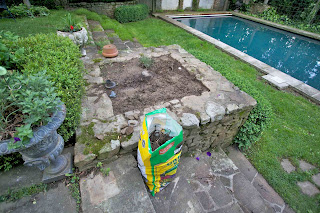 This is the second flower bed being prepared to be planted with flowers.  This entire bed had to be dug up and all of the roots from the maple had to be snipped out. 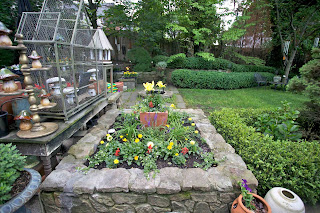 People have been asking me about the gardens so I thought I would take the time to answer some questions.

The upper garden was an old city backyard when I bought this house over 20 years ago.  It had a dilapidated garage, an ancient pear tree and a perimeter of weeds.  From a lifetime of travels, I stored away mental images of elements I loved and wanted in my garden.  We excavated the entire yard, built a new garage to look like an ancient ruin and then I worked with an 80 year old stone mason to design the hardscape. I put in an outdoor sink with hot and cold water, a cistern, a firepit, a pool and a wood burning oven.  I did most of the planting and in a couple years it was exactly the way I wanted it.  Then the project was over and I needed another.  I was becoming very restless.  Though I love living in a large city, I have always felt the need to have a farm.  I needed a big vegetable garden and I had no room in this newly finished garden to plant one. 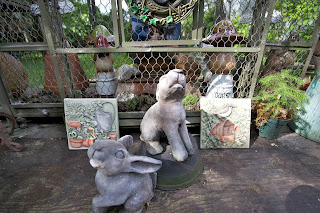 The properties behind me were old houses that had been turned into awful rentals years ago.  One of the houses had 12 people living in it.  They were ugly, dilapidated places and the tenants clogged the street up with all of their cars.  We worked with a real estate agent and negotiated a deal with the owners and bought the properties. 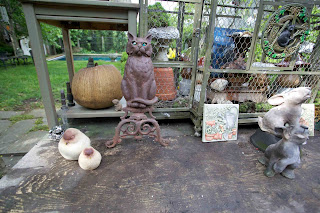 We immediately demolished the old houses and excavated the entire properties.  We were going to build a guest house but after months of planning and having it come in way over budget, I dropped the whole idea.  I bought a third place adjacent to the excavation and that became the stone house.  It was also in horrible condition but it had good bones and I had a vision. 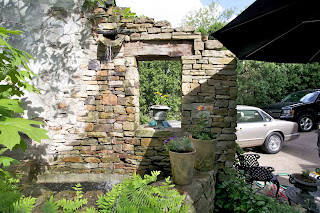 Once my hardscaping was in place I began planting like a mad woman.  I planted hundreds if not a thousand perennials.  I would wait until the fall and go to local nurseries and buy out their stock.  I got great deals and wonderful plants. 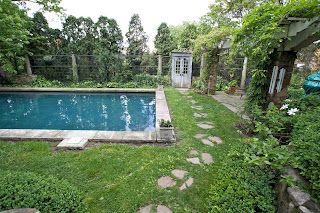 I put in this gate to separate the upper gardens from the lower.  I wanted instant gratification with the big trees and over planted and have had to take some trees out.  It is now a jungle down there but I wanted a forest and that is what I have.  I put in a huge vegetable garden which was wonderful until 2 years ago when this area was hit with the dreaded stink bug infestation. 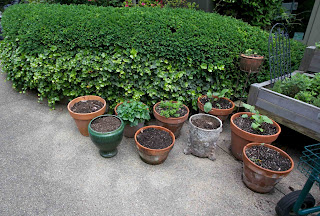 I am planting vegetables again this year but only a couple and just in these pots.  I will see how it goes with the bugs.  Not only are they creepy but they totally destroy the vegetables. 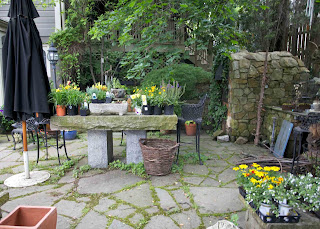 As far as help goes, I have some garden guys that come twice a month but only to cut grass and clean up fallen leaves and such.  My husband and I do the rest of the work ourselves. I use no chemicals for anything so there is no fighting the weeds.  I live with them.  Even my pool is chemical free.  I have a copper filtration system which kills off the bad stuff with a slight electrical charge. 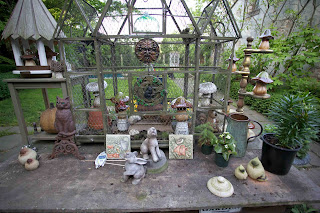 So that is the story of how my gardens grow.  It is an enormous amount of work but it is work I enjoy.  I think I have read every gardening book on the planet. 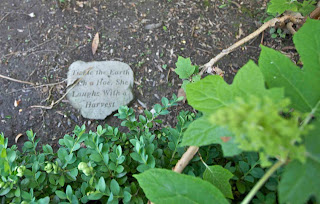 Click for a closeup.  This stone reads:  Tickle the earth with a hoe, she laughs with a harvest.  I love it. 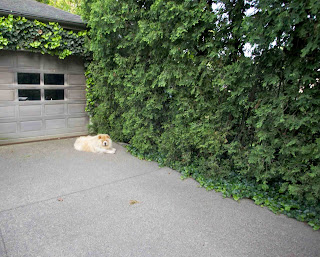 Teddy knows where the best shady spots are, the best basking spots in the sun, which pond has the tastiest water and she knows where the bad kitties slip under the fence.  I might have built these gardens but Teddy owns them!
art chow chow flowers gardening teddy vegetables

Robin Larkspur said…
This was a very interesting post; after all this time following you I enjoyed reading about the history of your gardens. Truly a beautiful work of love and inspiration!
May 12, 2012 at 11:22 AM

Candace said…
Thanks for the wonderful history of your property, Joyce! You should be on an episode of Martha Stewart!
Cheers!
May 12, 2012 at 11:26 AM

Barbara F. said…
I knew your yard was large, but I didn't realize it was several properties. You really made it into a farm in the city. Lots of hard work, but you have the most wonderful ideas. xo
May 12, 2012 at 11:47 AM

Anonymous said…
what an incredable story, this should be a book!You have such strength to accomplish your vision, amazing, so much work, wow!
May 12, 2012 at 12:11 PM

Beverly@Beverly's Back Porch said…
You sure had a huge undertaking in the beginning, but it has certainly been worth the effort. Beautiful! Hope the stink bugs are gone and you can have a garden again.
May 12, 2012 at 12:20 PM

Ina in Alaska said…
very impressive, interesting and thank you for sharing! Your pool looks so inviting.....

You did very well cleaning up the street. Now as for those stink bugs... ick!!

Question: Where is the cozy guest cottage with the Wurlitzer? Is that somewhere on this property?
May 12, 2012 at 10:35 PM

TARYTERRE said…
What a wonderful story of turning your dream into reality. That quote suits you well. Teddy looks quite content to OWN the grounds she rests upon. LOL You guys deserve so much credit for maintaining your little slice of paradise. That is alot of work, for sure. take care. HAPPY NMOTHER's DAY. Enjoy!
May 12, 2012 at 11:57 PM

Julia said…
Summer's definitely arrived at your house, then. We're yet to get organised but there's lots of inspiration in your photos to get us motivated. :)
May 13, 2012 at 1:58 AM

petoskystone said…
Amazing transformation! :) I hope your stink bugs are gone. I'm trying out a white vinegar spraying on the weeds this year.
May 13, 2012 at 4:26 AM

SharleneT said…
I agree, it is time for you to write a book of your properties' transformation to give hope to everyone. An absolutely beautiful journey.

You might miss the bug infestations if you plant your veggies a little earlier. I started last year and have had very little bugs and the plants are very strong. Tomatoes don't even need staking! Just a thought.
May 14, 2012 at 11:08 AM