October 13, 2017
There are not as many photos as I would've liked because my wife informed me that it's not particularly wise to walk around Rio with your phone out.  It attracts unwanted attention, evidently.  Unfortunately this means that I had to take photos a bit more infrequently.  But I still got plenty all the same! 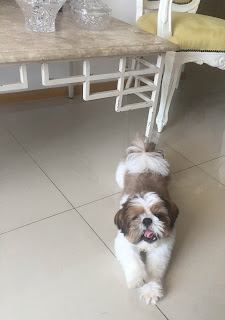 Here is a photo of the puppy we are staying with.  I like this photo because you get to see his cute little face.  His name is Rich, which might seem a little people-ish for English readers, but in Portuguese it's pronounced Hee-She, which I think is very cute. 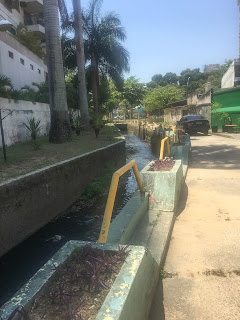 This is the Rio sewer.  Evidently, Rio has an open sewer.  It smells as you might imagine it would!  Looks scenic, however. 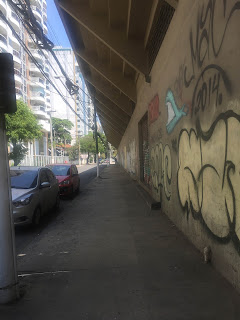 Graffiti on the walls of a large soccer stadium.

This is the only mention I've seen of Halloween on this whole trip.  I believe it's some dance club advertising a Halloween night.  It's something, at least!

The beach!  This part of Rio is on a bay, so the water is evidently a bit polluted and not the best to swim in.  However, it seems like lots of people nevertheless do choose to swim in it.  As well as fish in it.  And actually, I have been eating a lot of seafood on this trip....Oh well, best not to think about such things! 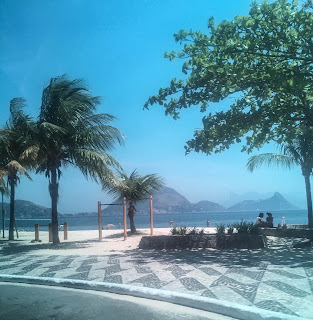 I love how you can see the mountains in the distance. 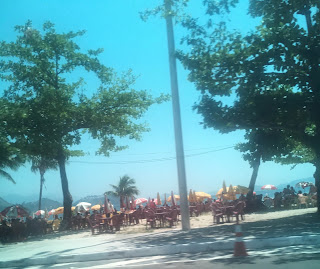 Today was a Holiday in Brazil.  Or rather, two holidays.  In addition to apparently being a holiday celebrating the Virgin Mary, it's also what's known as Kid's Day.  That's right, Brazil has a Kid's Day akin to our Mother's Day and Father's Day.  When I was a little kid, I used to ask my mother why there was no kids' day.  She always told me it was because every day was kids' day.  As I've gotten older, I've begun to realize just how true her words were. 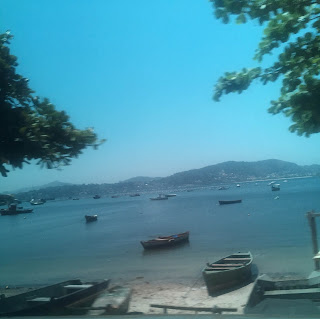 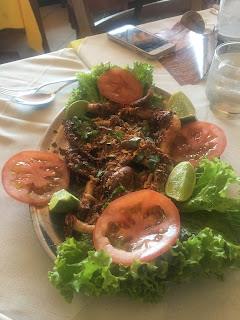 Rio also apparently has a ton of octopus.  I decided to eat more of it.  This octopus was especially wonderful because it was flavored with tons of garlic, as well cilantro, which worked very well. 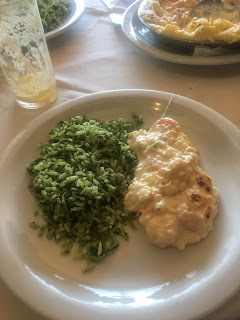 For the main meal, we got broccoli rice as well as Shrimp and Caitupury, which is a kind of local cheese that's ever so slightly sweet.  Wonderful! 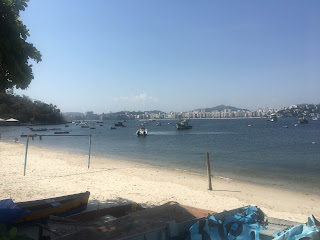 After lunch we walked across the street and took some pictures.  Here you can see a bunch of fishing boats. 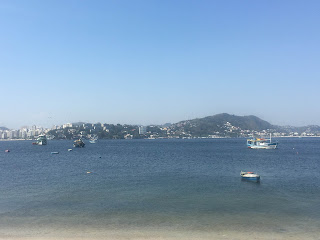 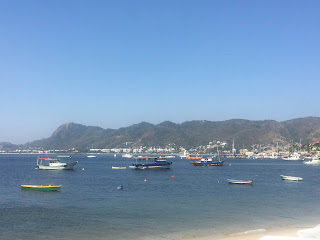 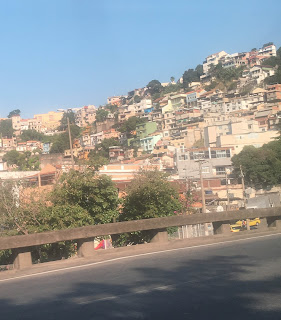 We called an Uber (which is ridiculously cheap in Brazil, often costing less than $5) and took it to the Christ the Redeemer statue.  Here are some colorful houses we passed along the way.  For me it's a bit strange to see so much development on mountainsides.  Despite there being ample mountains back home, there's basically none of this. 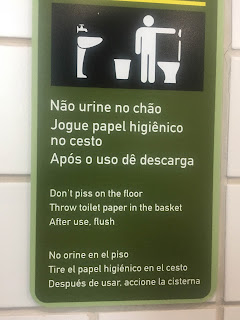 On our way to see Giant Jesus, I had to go to the bathroom.  The English translation here amused me. 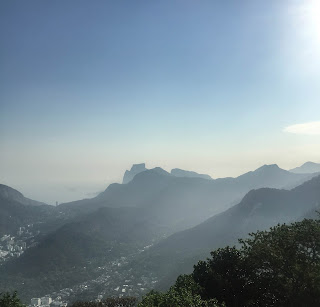 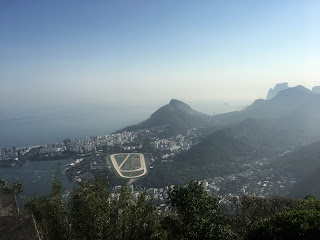 The thing to which your eye is drawn is evidently a gigantic horse racing course. 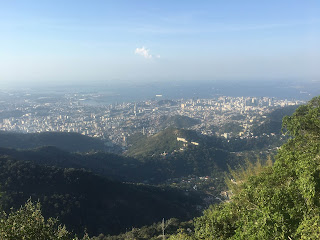 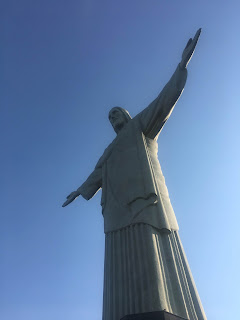 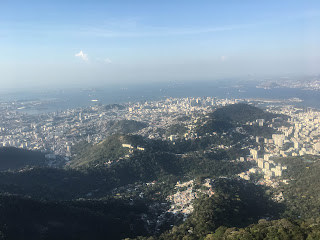 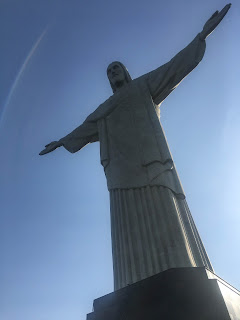 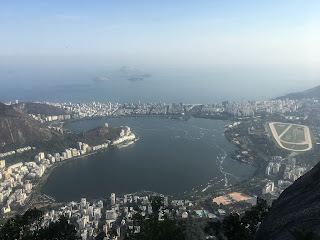 This is evidently a lake, separated from the ocean by a narrow strip of land.  I asked my wife if the lake was freshwater and she said she didn't know.  I'm not going to go and try to find out first-hand. 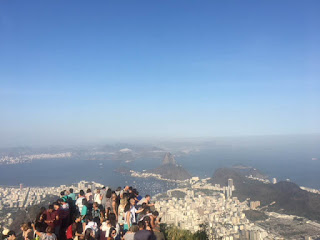 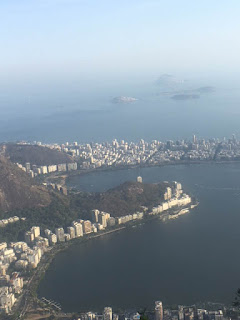 From this height, you can actually see some clouds below you in the distance.   Christ the Redeemer is an extremely famous Rio landmark.  It's also extremely tall. 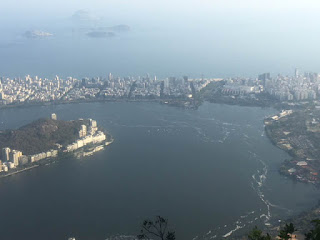 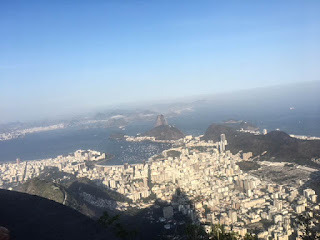 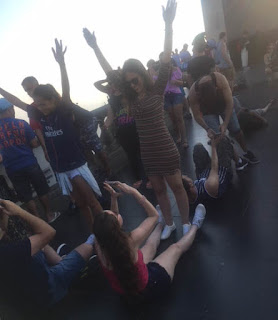 Here we see some tourists trying to use a technique called forced perspective to make it look like they're touching Giant Jesus's hands in the photos they're taking. 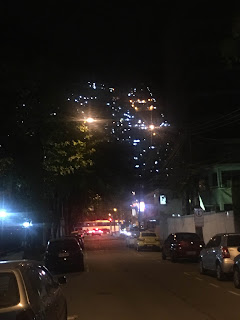 Later on we went and met up with a friend of my wife's in a nice part of Rio.  It was really neat to see the lights on the mountain in the near distance. 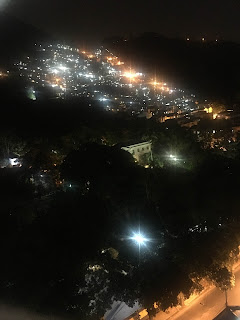 Another view of the same lights from my wife's friend's apartment.  These hillside lights are from a favela, which is essentially a Brazilian slum.  Most of the favelas in Rio are on mountainsides, for reasons I've yet to determine.  Evidently these areas are more or less completely controlled by drug lords, and the police have hardly any involvement with them.  Unless, of course, they start leaving the favelas and causing trouble in the wealthier parts of Rio.  When this happens, the army actually goes into the favelas.  It's a very disturbing concept.  I remember some years ago back home when the police proposed driving around some of the bad neighborhoods in something similar to a SWAT vehicle for regular patrols.  This idea was met with vehement outcries, and I don't think it ever actually happened.  Compare that to Brazil, where the army is used as punishment for a favela's violation of what's essentially an unwritten policy of containment.  Disturbing. 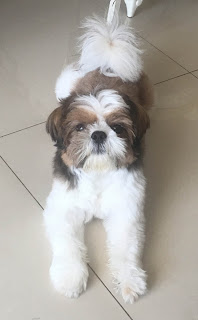 I didn't want to end this post on such a grim note, so here's another photo of Rich!  Look at those fluffy little paws.  In Portuguese, you'd describe Rich as 'fofo'.  Pronounced FOE-Foo, this word means cute.  Which he certainly is!

Linda said…
Somehow, I missed this post and view of giant jesus...lol. People who are poor are forced to live where others don't want to live. Read "Sula" In this book, the wealthy finally wanted to be in the mountains and forced the poor out of the mountains. It is a class thing.
October 14, 2017 at 4:51 AM

whynotgrl67 said…
Enjoy the rest of your journey and get home safe. I’ve enjoyed the ride along , but please let your mom know we miss her and are thinking of her.
October 15, 2017 at 8:22 AM

chickpea678 said…
Really wonderful commentary B. Learning so much about Brazil. And that dog sure is FOE-foo!
October 16, 2017 at 7:26 PM