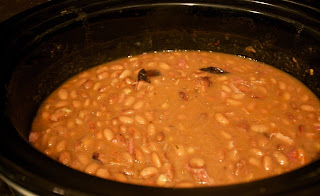 I would say that my favorite recipes are almost always regional.  I love making food that people have eaten for generations.  West Virginia Soup Beans is one of the best.  These beans. served with cornbread and sides of coleslaw and chow chow (the kind you eat, not pet), have been a tradition passed down from mothers to daughters to granddaughters for as long as mining has existed in that state.  In late winter when the larder was bare and the ramps were yet to appear, this was a meal that sustained many families.

Place this all in a slow cooker and cook on high for 2 hours and then turn it down to low and cook for 5-6 hours until the beans are tender. Remove the meat and discard the bones.  Shred the meat and add it back to the beans.  Remove 1 cup of beans and mash them and add them back if you want a creamier dish.  Ladle some beans into a bowl and serve with diced onion on top and a wedge of cornbread. 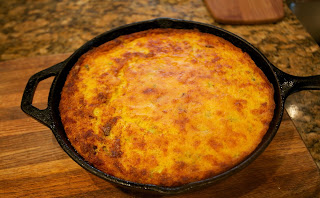 I served them with my Navajo Cornbread: 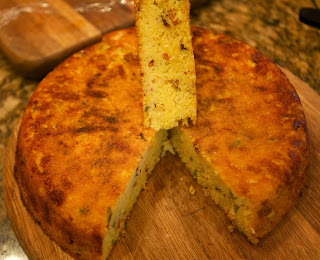 This is a very flavorful moist cornbread. 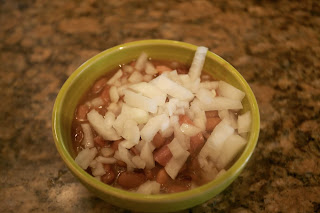 Okay...I know!  A little heavy on the onions.  We are very big onion fans in this house.  You can use a lot less or none at all.

Here is a story about West Virginia Soup Beans that you might enjoy:

A bowl of smoky pinto beans is to West Virginia what an earthy Cabernet is to the Napa Valley: It's an indulgence relished by locals, intriguing to outsiders and central to the region's culinary landscape.
For a true West Virginian, nothing compares to sitting down to a steaming bowl of brown beans served up with a crumbly wedge of homemade cornbread (or grit bread, as we like to call it). Simmered all day in a cast-iron pot with a big slug of fatback, brown beans have warmed the bodies and souls of many hardworking men and women of the Appalachian coalfields.
My mother grew up in Anawalt, W.Va., a small coal-mining town hidden deep in the state's southwestern hills and valleys. Anawalt is one of many nondescript towns that lived and died by the fortunes of King Coal.
Today, it's a ghost town where the whispers of miners who carried day-old biscuits in their lunch pails as they descended a mile deep mingle with the few inhabitants left, whose per-household incomes hover around the $14,000 mark.
It was here that my mother learned the simple culinary art of making the beans and cornbread meal from her grandmother Charity, who ran a small boardinghouse that welcomed miners hoping to find work inside the damp hollows of the nearby mountains.

Miners, their faces still streaked with coal dust, gathered for supper in Charity's cozy kitchen along with the family. My great-grandmother stood at the wood stove, periodically wiping her hands on a stained, floral-patterned apron.
Pinto beans simply seasoned with a chunk of fatback and a little salt and pepper bubbled inside a large cast-iron pot. As the miners sipped mugs of hot coffee, my mother laid out bowls of chow chow relish, minced onions and cole slaw to accompany the beans. Out of the oven came the cornbread in its own cast-iron pan, still sizzling with the essence of bacon drippings.
It was 1943, only a few years after one of the Pond Creek mines in Bartley, W.Va., exploded, claiming the lives of 91 men. It was a time when phrases like "scrip," "black lung" and "mining disaster" fell from the lips of workers, wives and children like the tar-colored dust that settled on their windowsills. It was a time when the grand comforts of coal company officials contrasted sharply with a miner's family struggle amid the crushing poverty of the coal camp-- where food and provisions had to be purchased at the company store, owned by the coal company itself.
The beans and cornbread meal was born of these ironies and inequalities. Loaded with protein, carbohydrates and fiber, it was a healthy, satisfying reprieve from the 12-hour days a miner spent on his knees in a dark and unforgiving coal shaft.
And, it was inexpensive. Made from ingredients that were often on hand and relatively nonperishable (such as cornmeal, bacon grease, dried beans, grits and fatback), the beans and cornbread supper was easy to prepare and could keep for several days.
Even better, while the beans simmered in a pot for most of the afternoon, a hard-working woman like my great-granny could get back to washing clothes, canning, gardening and looking after the children.
Today, you can still get a taste of real beans and cornbread throughout West Virginia, whether you are curled up in small corner booth at the local diner or are one of 300 guests attending the annual Mercer County Democrats "bean dinner" honoring the likes of U.S. Senators Robert C. Byrd and Jay Rockefeller.
Cornbread and beans are the type of food, simple and warm, that reminds us all of where we come from. And for West Virginians, they represent the true soul of the mountains.
baking bread cooking ham meat recipes soup

Brenda said…
Yum-having been born on a little street in Hurricane in Wv and living there all but 15 years of my 70 years. I grew up on beans and cornbread. Mother simply added salt and pepper and ham bone to beans-delicious-usually on wash day-when I became a vegetarian in 1992, I just added onions and cooked on slow cooker-just as good with cornbread!!!! All cornbread has to have a little sugar so the sweetness is there. I never heard of ramps u til I was grown and NO didn't like them or the smell but most do!!! I moved from WV in December to Indiana with weeks throughout the year in Florida-miss the mountains and when autumn comes will miss the trek to Hawk's Nest and the view! However being near daughter in Indy and son in Florida and grand kids will suffice!!! Love your blog!!!!
August 1, 2018 at 5:39 AM

Susan said…
I happen to find smoky beans and cornbread the ultimate in comfort food - born and raised (briefly) in Virginia. I will have to say, after reading this story, I have even more respect for you than I did before. And I had a LOT of respect for you before. There is a steeliness and grit that is passed down from people who have lived with little and in hardship. I can see it in (some) of the children of parents who made it through the Depression.
August 1, 2018 at 6:52 AM

Leanna said…
I miss having hearty soups, chowders, chili, and stews. I cannot wait until the weather turns chilly this fall. The first soup of the season is my 3 bean soup for David and potato corn chowder for me.
Last night I couldn't sleep so I was looking at Pinterest and there was an Autumn section that I started pinning for ideas this fall. Before I knew it the sun was coming up this morning.
August 1, 2018 at 8:11 AM

Theresa said…
Pinto beans are my favorite, although I do love(and make) a good pot of Boston Baked Beans being the dang Yankee that I am. I always welcome bean recipes and those with cornbread along side, even better! We like onions here too!
August 1, 2018 at 11:52 AM

Guillaume said…
Looks delicious. I am in the mood for hearty soup, but it's not quite the right weather here.
August 1, 2018 at 2:30 PM

Linda said…
I won't be eating pinto beans ever, but I do love blackeyed peas, or great Northern or Navy beans. Those are the beans of my childhood in Memphis, TN and Jackson, MS. I love chow chow and ate it until the day my whole faced swelled up. I am afraid of it now. Slaw and beans are heaven! I may put some in the crockpot, beans not slaw. I can no longer lift the cast iron pot. So, the 4 qt crock pot works for me.