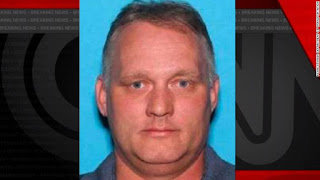 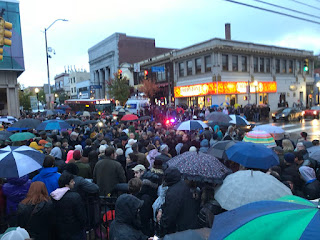 This is Trumps America.  He has unleashed the hounds. 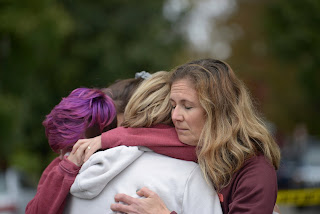 His response, If there had been armed guards this would not have happened. 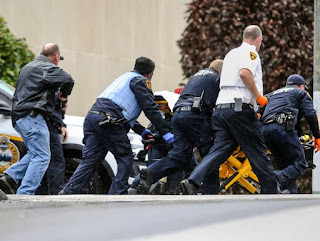 Did no one tell him that 4 armed police were shot including SWAT members? 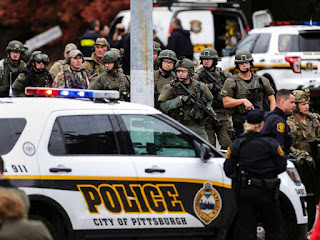 The shooter ran into the synagogue screaming: "all Jews must die". He posted that he hates Trump because he hasn't done enough to get rid of the kikes. America 2018....amazing. 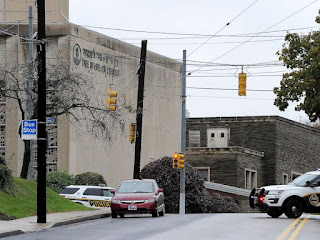 Debra She Who Seeks said…
This is what happens when racists and anti-semites feel emboldened and socially supported by seeing haters elevated and applauded in a society.
October 28, 2018 at 6:53 AM

Mary said…
I listened to Mark Hatfield leader of HIAS, who reminded us that we must call people ( mentioned that crazy Uncle at Thanksgiving) out when they say racist and hateful things. So many time we just let it go when it is a friend or relative. We cannot' last it go" we must say hey don't talk like that. I can still remember the time my Mother snapped at my father when his said something ( it was ever so mild as I recall) about a certain county. Her response was swift and effective, we cannot "let it go!
October 28, 2018 at 7:05 AM

Leanna said…
It seems to be getting worse as long as the Mango Mussolini stays in office. We must call out the haters and the racists let them know we will not stand for their stupidity. It must end.
October 28, 2018 at 9:59 AM

Guillaume said…
Mango Mussolini, that sounds right like Trump. I always hesitate between John Iselin or Buzz Windrip to find the literary equivalent.
October 28, 2018 at 3:44 PM

Mystica said…
I was watching CNN when the story initially broke and it was heart rending. I definitely agree that by omission or commission when leaders support violence of any kind the masses especially the hysterical ones follow. We have an identical situation in my country. Mob rule.
October 28, 2018 at 8:47 PM

Starting Over, Accepting Changes - Maybe said…
The United States of guns and violence.
October 28, 2018 at 9:23 PM

The cottage by the Cranelake said…
It is so important that You Americans votes every time!