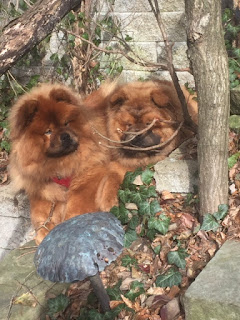 A puppy puddle.  A puppy pile.  This looks like a two headed chow chow. 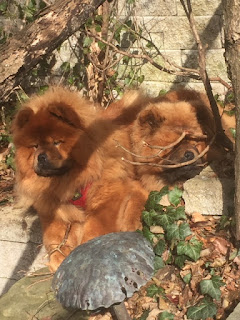 It's actually The W's resting after running around the gardens like crazy little kids. 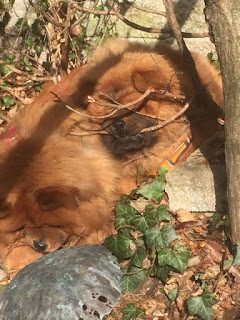 Winnie naps while Wils chews on the closest branch.  Click for a closer look. 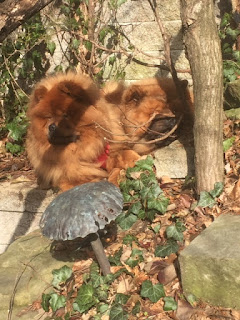 They've squeezed themselves into a tiny spot on a shallow ledge so they can get some sun. 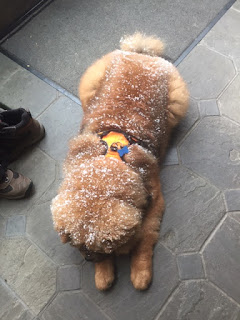 In contrast to Willie the snow puppy.  We've had little snow this winter but as soon as flurries fly, he is out there enjoying them.  I think we have a a snow lover and I hope we get enough this winter to find out. 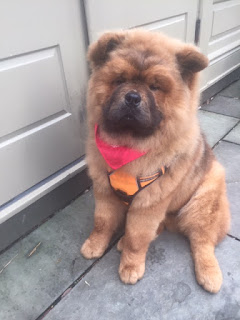 I asked Willie to smile for the camera. 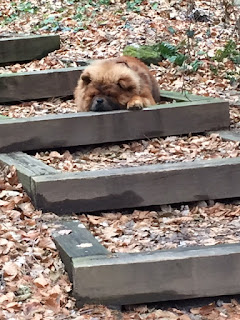 I originally created these gardens for our first chow, Freddy.  Freddy never used it much and died not too long after it was completed. 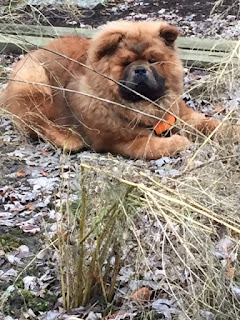 Our second chow, Teddy, loved the gardens and drank from the ponds and hunted 'bad kitties' down here.  But Teddy pretty much patrolled the grounds and returned to the mother ship up above after satisfying herself that there were no intruders on the property. 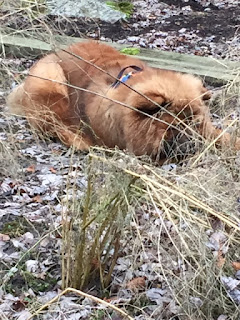 The W's, on  the other hand, use the gardens like kids at an amusement park.  They run and play and hunt and frolic.  They have a blast.

Susan said…
I would love to dive into the middle of that puppy puddle this morning! It’s in the single digits, even with the sun. I agree – I think the dogs need to come in pairs!
January 12, 2019 at 6:18 AM

NanaDiana said…
OH! Aren't they just the sweetest pups ever? My son just got a golden-doodle and he is about 5 months old and already weighs about 50 pounds..but he is SO smart I can't believe it.
Have a really great day- xo Diana
January 12, 2019 at 8:21 AM

Leanna said…
Puppies. I think they are the sweetest things. Have you ever thought about how empty our lives would be without puppies to take care of? I hate that thought.
January 12, 2019 at 8:37 AM

Well one can never be sure that two dogs will get along but usually it does.