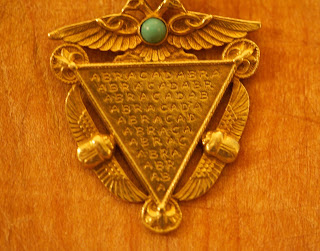 A touch of history ...
Long ago, people used to hang a piece of parchment with the word Abracadabra around their neck.


The pendant we have here is what jewelry is meant for... to catch a symbol, feeling, emotion or wish into a wearable object of beauty. We see here the so called Abracadabra-talisman. This type of charm was used throughout the Middle Ages. One only had to write the word “abracadabra” down in the triangular pattern and wear it round one's neck to be protected from various diseases and to be cured of fever to lead the evil energy to the ground.


The first known mention of the word ABRACADABRA was in the 2nd century AD in a poem called De Medicina Praecepta by Serenus Sammonicus, physician to the Roman emperor Caracalla, who prescribed that the sufferer from the disease wear an amulet containing the word written in the form of a triangle. This, he explained, diminishes the hold over the patient of the spirit of the disease. Other Roman emperors were followers of the medical teachings of Serenus Sammonicus and are likely to have used the incantation as well.


Abracadabra sounds as the Aramaic word “Abrahadabra” which roughly translates into "I will create as I speak." it could also derives from the Hebrew “Abreg ad hãbra” meaning “strike dead with thy lightning”.


On the other side of the pendant we can read "De vos mains grossières, Parmi des poussières, Écrivez, sorcières : Abracadabra" which translates to “Witches with your raugh hands, write in the dust : Abracadabra”. This is from a text from Victor HUGO's “Odes et ballades 14”. Victor Hugo is also the author of the famous “Les Miserables”.


This pendant is loaded with symbolism. We also can recognize a double headed bird and two flying scarabs. Not that we know the link with the turquoise that is used but we are pretty sure its use is for some symbolic reason.

Country of origin: Although it does not carry any legible control marks we believe this to be of French origin.

Style specifics: In our opinion, this object is a product of the second neo-egyptian style in the 19th century. That style has known three revivals since 1800. The first was caused by Napoleon's journey to Egypt (circa 1805-1810). The second revival was caused by the opening of the Suez Canal (circa 1870) and the third was initiated by the discovery of King Tut-Ankh-Amun’s tomb (circa 1922).

Birthstones: Turquoise is the birthstone (or month stone) for December.
(more info on birthstones) 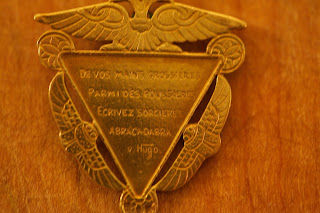 No one seems to know who the original owner was, though some think it was Hugo himself. 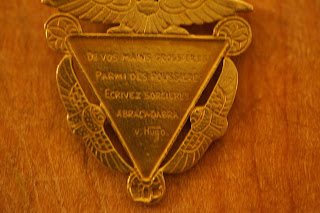 The back roughly translates to:  Witches with your rough hands, write in the dust: Abracadabra

Such a cool and very mysterious piece.

I really should try to find out more about it.

A little info on Victo Hugo:

Poet
Victor Marie Hugo was a French poet, novelist, and dramatist of the Romantic movement. Hugo is considered to be one of the greatest and best-known French writers. Outside France, his most famous works are the novels Les Misérables, 1862, and The Hunchback of Notre-Dame, 1831. In France, Hugo is known primarily for his poetry collections, such as Les Contemplations and La Légende des siècles.
abracadabra victor hugo witch jewelry

Guillaume said…
I knew about Abracadabra. And I read both The Huntchback of Notre Dame and Les Contemplations.
September 12, 2019 at 10:11 AM

Rain said…
That kind of gave me chills reading it. I bet you it was Victor Hugo. You have such a nice piece there and I bet it's filled with a history of energy!
September 15, 2019 at 9:22 AM