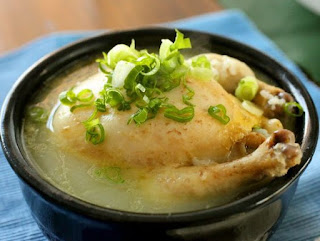 Tomorrow is The Blog Tech's birthday.  Or should I say, a week of birthday celebrations?  He likes his birthday a lot.  Since I am up to my eyeballs in Thanksgiving prep, we decided to take everyone out to eat.  When that comes to The Blog Tech, it always means Asian food.  We went to one of our favorite Korean places and started with one of those huge boats covered in fantastic sushi.  No pic of that, sorry.  When it was time to order our main meals, I remembered that I saw  a small sign as I walked in the door.  It said that they had 'special Korean ginseng soup'.  That is what I ordered.  In all the years of eating and cooking copious amounts if Korean food, I had never had this dish before.  When it arrived, I was a bit surprised to see an entire Cornish Game Hen treading water in a bowl of steaming broth.  It had 2 small balls floating next to it which appeared to be olives though that made no sense.  I thought perhaps they were plums until I made The Blog Tech try one....hey, he eats anything! His eyes widened and he said....a date?  Really?  Is this a ripoff of Scottish Cock-a-leekie which has prunes in it?  Or maybe the ripoff is the other way around?  Anyway, back to the soup.  It was incredibly and surprisingly bland.  I pushed it aside claiming I didn't think I could eat it.  It was like eating a flavorless chicken in it's bath water. I kept glancing at it wondering why it would be such a popular dish.  Then I started adding ingredients we had on the table from our bulgogi.  The chicken came with a small bowl of salt and pepper so I added that first.  Then I added rice, bean sprouts, kimchi, gochujang and some soy sauce.  Wow!    This restaurant's version really wasn't done well but I will be perfecting their recipe and making this soon. 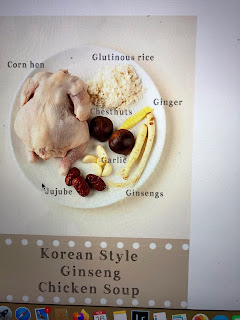 At the Blog Tech's dinner, I found my new obsession. Interestingly, Koreans call dates JuJubes.  Candy!  I'll post mine as soon as I make it. I can't wait.  I just have to get this Thanksgiving thing out of the way first.  This might be the star of my next Sunday Dinner. 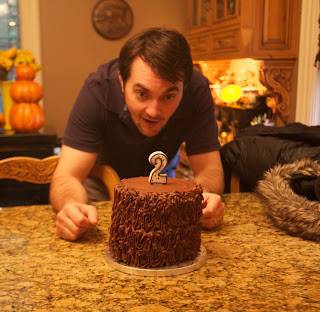 We came back to our house after dinner to sing happy birthday and eat the wonderful cake my daughter made for her brother...Boston cream pie cake. He was very excited.  We forgot candles so we used the one we saved from Winnie's birthday. 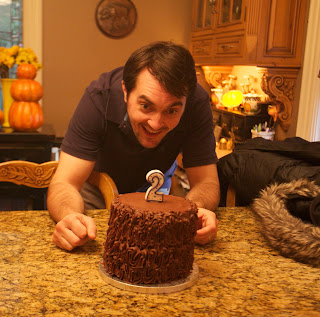 I mean, really excited.  Put a camera in front of this guy and look out!!!  He is the polar opposite of me when it comes to being photographed. 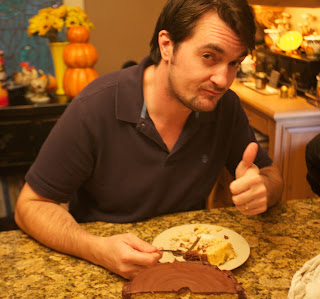 Christer. said…
I don't think I've ever eaten Corean food but it is odd that something popular is so bland?!

I have actually had a small Jujube tree :-) I had no idea how to treat it so I killed it after a while :-) I'll try it again though because it is almost hardy enough to live here.

Leanna said…
Happy Birthday, Blog Tech!! I've had Korean food many many times. Some of it can be bland tasting and that is the reason why I tend to dress up some items when I order. There is a place that we go to called Kimchi Jons in Austin. It's a small place but they have fantastic bbq.
November 17, 2019 at 7:00 AM

Rain said…
He's so cute Joyce! Funny idea for Winnie's candle. I can see how that soup would be bland, but I'm glad you figured out how to make it yummy! You should find out who created that soup first, the Scots or the Koreans!!!
November 17, 2019 at 7:05 AM

Cottage Tails said…
Happy birthday week to the Blog Tech. Look forward to your version!
November 17, 2019 at 10:33 AM

TARYTERRE said…
happy belated birthday to the blog tech. looks like he loves that cake.
November 19, 2019 at 2:02 AM