The Best Chicken You Will Ever Eat 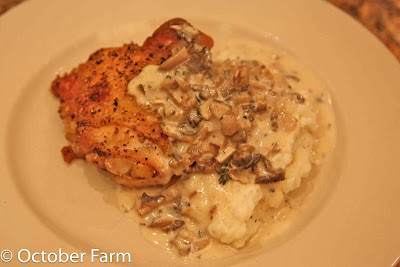 Sometimes it amazes me how long it takes for me to learn things. I love chicken thighs but I have never liked dealing with the fat in them so I rarely buy them. I bought some recently and immediately forgot what I was going to make with them. After two days of them staring at me each time I opened the refrigerator, I decided I had to make them. I decided to simply roast them. But first I pan fried them to make the skin crisp. I didn't expect much but I actually ended up with the best chicken I have ever tasted. Then I served it over mashed potatoes with a mushroom sauce. 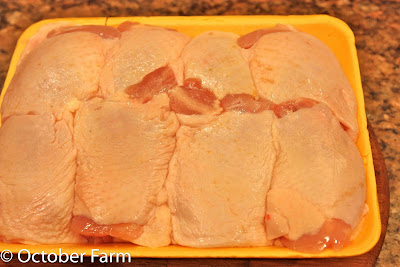 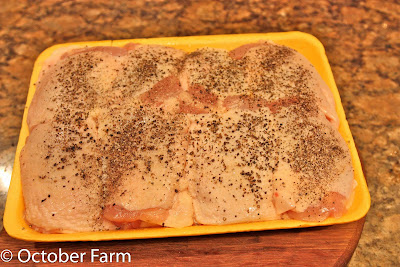 Season them heavily with fresh cracked pepper and sea salt. 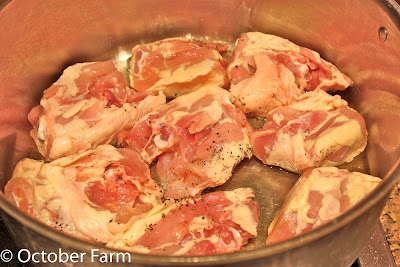 Place them skin side down in a heavy pot with about 3 tablespoons of oil heated to medium high. 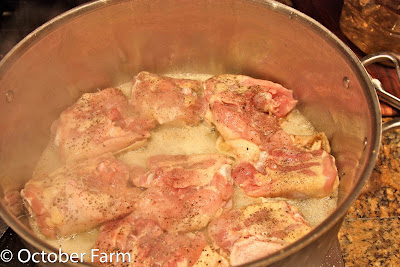 Season the undersides of the thighs while the tops are crisping. Move them around as they cook to keep the skin from sticking to the pan. They need to cook for about 15 minutes or until the skin is crisp and golden brown. 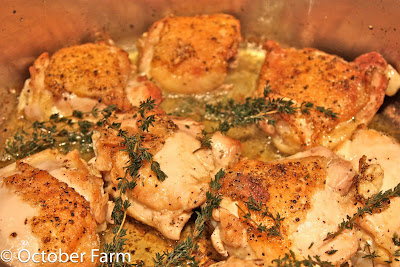 Flip them over, skin side up, and throw in some fresh herbs. I used thyme but they would be good with rosemary too. Place them in a 475 degree oven and cook them for about 45 minutes or until the internal temperature reaches 170 degrees. 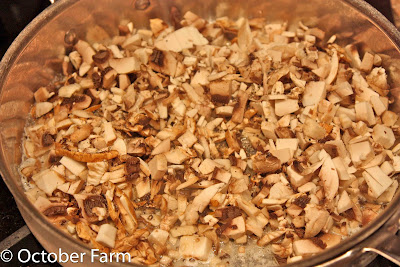 For the mushroom sauce, dice a bunch of mushrooms and saute' them in a bit of butter until they start to turn golden. Season them with salt and pepper. 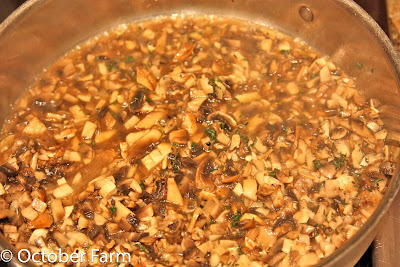 Add about 2 cups of chicken stock and 4 tablespoons of fresh parsley. Let this simmer for about 6 minutes. 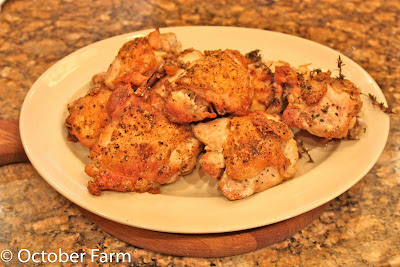 Remove the chicken from the oven and let it sit for a few minutes. At this point, all of the fat has rendered out of the chicken. The meat is moist, the skin is crisp and all the fat is in the bottom of the pan. Discard the fat in the pan. 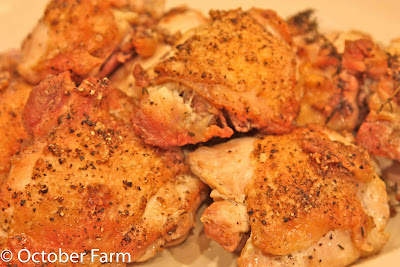 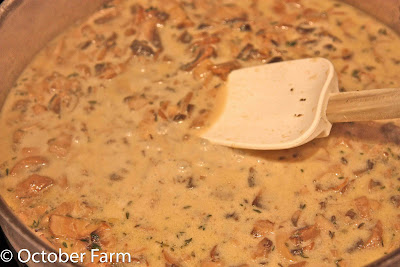 Add 1/4 cup of cream to the mushroom sauce and thicken it with a tablespoon of flour mixed into 1 tablespoon of melted butter. Just mix it together and stir it into the simmering sauce. Stir it as it thickens which will take about 1-2 minutes. Remove from the heat and keep warm. 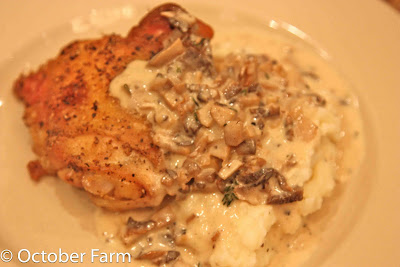 Chicken thighs will be a new permanent addition to our menu!

I am thrilled with this recipe because long ago I had a favorite French restaurant and I always ordered this exact dish when I went there. They closed long ago. I no longer remember the name of the restaurant but i never forgot their chicken. Now I can make it myself.

brokenteepee said…
My favorite chicken dish is Italian and involves lots of braising, anchovies and garlic.

Debbie said…
Hi Joyce!! You are still amazing me with your cooking! Unbelievable.... how you manage to come up with all this wonderful stuff and do all the other fabulous things you do is beyond me. You inspire me...keep up the awesome work my friend...hugs...debbie
January 14, 2012 at 9:40 AM

Amy said…
This looks so good, as do all of the recipes you show! I am just a beginner in cooking though, but this looks simple enough that I just may be able to do this one! Thank you so much for doing what you do! Your blog is my favorite and I check it EVERY day. If you haven't posted anything new, that's okay because I have LOTS of the older posts to catch up on! You are amazing!
January 14, 2012 at 9:53 AM

Anonymous said…
I like anything with chicken :-)
I think I have some chicken thighs in the freezer so I might try this one tomorrow :-)

Barbara F. said…
I can't wait to try this. I usually buy boneless skinless thighs. The hallmark of a great chef is how they make a sauce - your sauces and gravies are incredible. xo
January 14, 2012 at 11:11 AM

Barb said…
We are huge chicken eaters-this looks wonderful. Another of your recipes I'm anxious to try!
January 14, 2012 at 1:03 PM

Marigold said…
Did you hear? Paula Deen has been diagnosed with Type II Diabetes. Kelly will be devastated!
January 14, 2012 at 1:04 PM

Robin Larkspur said…
This chicken dish looks so delicious and comforting! On a cold snowy day, with yummy mashed potatoes, that sauce looks amazing. I think I'm drooling on my keyboard. And finish the meal off with one of your fab desserts!!! Oh, sell my clothes, I'm headin' to the Summerland!!
January 14, 2012 at 1:23 PM

The Tablescaper said…
These look great!

I just roast my thighs on a cookie sheet (with sides), heavily seasoned with Italian seasoning, garlic seasoning, rosemary, oregano, pepper, fresh lemon juice and parm cheese at 475 degrees for 1 hr. 15 minutes. The skin turns out crispy and with all the spices, is the best part of the chicken!
January 14, 2012 at 5:54 PM

Anonymous said…
I just don't know how you come up with all these tasty meals. How do you have the time for everything you do? I'm really impressed with you.
January 14, 2012 at 8:06 PM

Balisha said…
Just happened by your blog and saw this recipe. I was undecided about what to have for Sunday dinner and this looks perfect. We were going out to eat, but I changed my mind...because my mouth is watering. Thanks for the idea.
Balisha
January 15, 2012 at 7:52 AM

SharleneT said…
Since I have always preferred dark meat to the light, I'm definitely going to check this out and, of course, adapt it to the solar oven. I can almost taste them as I type... yummy... Thanks for sharing. Come visit when you can.
January 18, 2012 at 9:25 AM

Phoebe said…
Simply amazing... I will try this dish this evening! I LOVE Cremini mushrooms , & will use them for this delicious looking chicken recipe - I believe inspiration comes when we least expect it, and I'm so glad you found it... thank you so much for passing it on!
January 19, 2012 at 1:16 AM 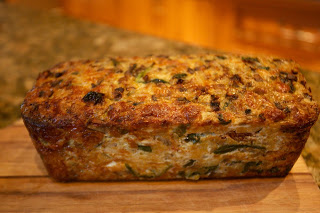 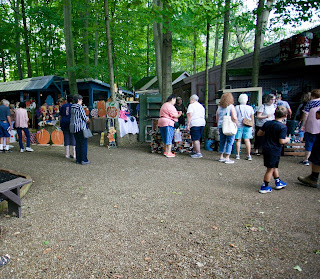