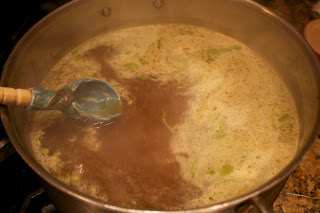 First I made them chicken and dumplings because seriously, on a cool Autumn day what's better than a big bowl of steaming chicken and dumplings?  I start with a pot of stock I've made from roasting chickens for Teddy because I make sure to feed all of my children very well!  I added a couple bay leaves and some celery from my garden.  It has such excellent flavor. Season the stock with salt and pepper and some bouillon for added flavor.  Add some diced cooked chicken. 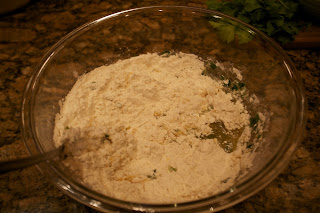 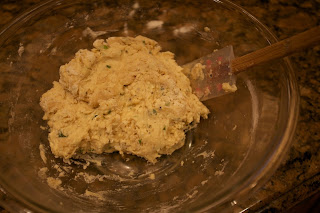 Mix this together and add some chopped parsley if you like. 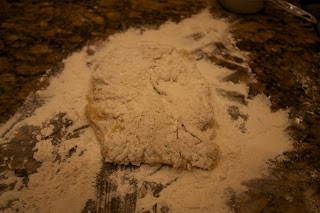 Dump it out on some flour and roll it to less than 1/4 inch thin. 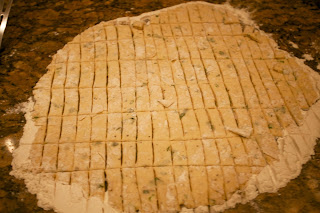 Cut it into strips with a pizza cutter.  Drop the dumplings into the slightly boiling stock and cook until they float.  The flour on the dumplings will help to thicken the stock. 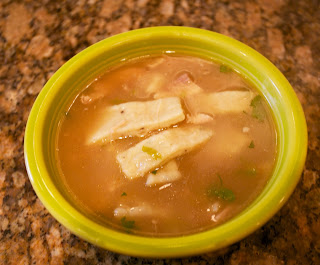 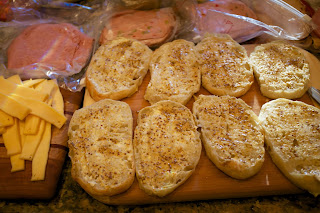 I made more telera rolls which I showed recently on the blog.  They are most excellent for sandwiches.  Smear on some mayo and whole grain mustard. 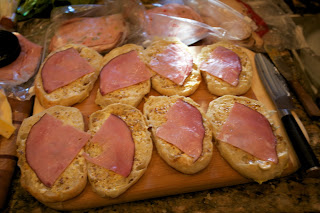 I added a bit of good smoked ham I bought recently at a smokehouse.  It's so smokey that a little goes a long way. 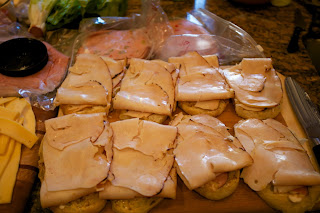 Then I added smoked turkey. 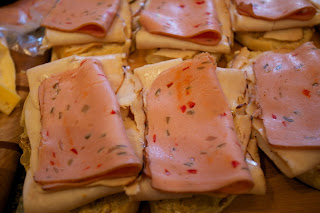 But the surprise was, I added a bunch of old fashioned lunch meats.  I hadn't even thought about these in years.  This one is a pickle and pimento loaf. 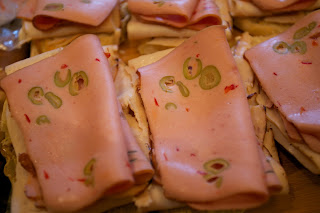 This is olive loaf. 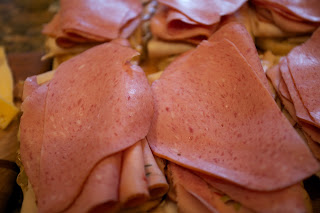 And this one is actually called 'Old Fashioned Loaf.  Basically they are flavored bologna's which are actually just American versions of German leberkase.  These were popular when I was a little girl but all of our stores still carry them.  I don't think my kids have ever seen them let alone tasted them.  Hey, watch out when you ask me to surprise you!  At lease I didn't add headcheese which is known as souse around this area.  I'll save that for a future surprise. 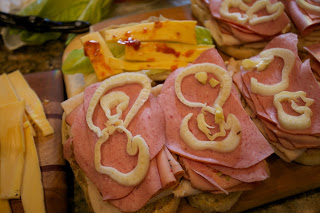 Next I added graaskaas cheese, crispy lettuce and some pickled fennel I made recently.  This time of year I add my oven roasted tomatoes to sandwiches because the fresh tomatoes are tasteless.  If you roast them, it concentrates their flavor and they have very good taste. 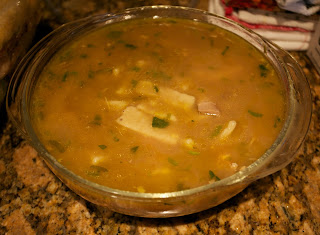 The soup was put in containers. 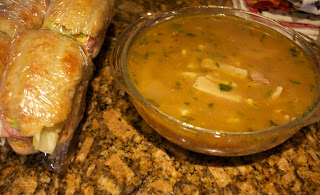 And it was all delivered and put in their refrigerators ready for when they arrived home from work. The Blog Tech immediately texted me after biting into his sandwich asking what the surprising but welcome flavor was on his sandwich.
baking bread chicken cooking ham meat recipes repurpose sandwiches soup turkey vegetables

Anonymous said…
Those sandwichews do look yummy! I haven't seen olive loaf and old fashioned loaf here in ages, must be over twenty years now. I guess they still can be found somewhere in the big cities though.

Heritage Hall said…
You are such a great Mom - and the memories you are pouring
out upon your Children will be with them all their days. I
remember those loaf cold cuts, but the "health experts" tell
us to avoid processed deli meats... I wonder...Yours is one
sandwich I would not avoid...
November 6, 2016 at 9:42 AM

Guillaume said…
I love everything about this old fashioned sandwich except the ham.
November 6, 2016 at 11:50 AM

Myra said…
I enjoy your posts so much. This is no exception. I wonder if you could tell me how long to roast the tomatoes ... never heard of this. Thank you.
November 7, 2016 at 6:26 AM

jaz@octoberfarm said…
you can find directions for making oven roasted tomatoes here: http://octoberfarm.blogspot.com/2011/03/tuscan-egg-sandwiches.html
November 7, 2016 at 6:54 AM

Nancy said…
Would you adopt me, please, so I may please eat at your home? As a disabled almost 70-year-old, living alone, I do not cook as I did when I was rising a family. A bad back and rotator cuff tears don't help eithet but I am always inspired by everything you make. Your energy astounds me. I will somehow make chicken and dumplings! Wish I could still find stewing hens. I thought of you, and your love of fall, today as I went to the spine doctor. As I got out of the car it was like a Winnie the Pooh and the Blustery Day type of day and beautiful gold ginkgo leaves were swirling everywhere, one even landing on my car seat when I opened the car door. A true shower of gold. I have not seen ginkgo trees since my college days in Buffalo. Thanks for all the inspiration.
November 11, 2016 at 7:27 PM