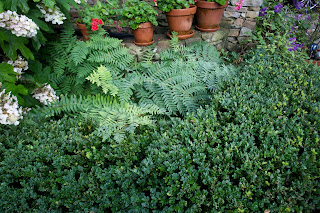 I have always loved ferns. 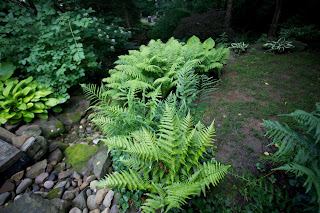 I think they remind me of being cool and shady. 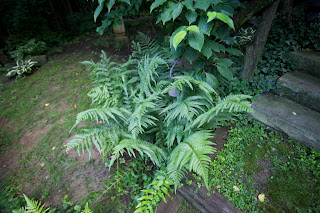 
Ferns are fascinating! They are an ancient family of plants with a prominent place in folklore—especially on St. John’s Eve (June 23) and St. John’s Day (June 24).
Ferns first show up in fossil records from a time over 100 million years BEFORE dinosaurs walked the Earth. In fact, ferns grew before flowering plants existed.
Long ago, people couldn’t explain how ferns reproduced since they lack flowers or seeds. (Today we know that ferns reproduce from spores.)
It was this mystery of the non-flowering fern that led to folklore about mystical flowers as seeds.
Here is some of the folklore that I have have found—and thought that you would enjoy …

People throughout the world frequently use ferns as medicines for various ailments, especially ancient tribes.
The spores on the underside of the fern provide relief to the stinging nettle (which is often nearby).

The ancient fern has a history rich in symbolism.  As mentioned above, ferns were seen as good luck, often for new lovers. The fern symbolizes eternal youth.
To the indigenous Maori of New Zealand, the fern represented new life and new beginnings.
To the Japanese, the fern symbolizes family and the hope for future generations.
According to Victorians, the fern symbolized humility and sincerity. Click to see the meaning of plants and flowers.
Starting in June, my woods and lowlands in New Hampshire fills ferns.  (Ferns require liquid water to reproduce, which is why you’ll often find them near streams and moist, forested areas.)
They sprout from wet soil in late April and the young fiddleheads appear bright green against the decaying leaves.

Have you ever eaten fiddleheads? So-called because it looks like the tuning end of a fiddle, the fiddlehead the very top of the young ostrich fern, still tightly furled and sheathed in a covering that can be a challenge to remove. (Be aware that it’s only the ostrich variety that is edible. In addition, they must be picked before unfurling; the leaves that follow this growth phase are poisonous.) Many people in this area boil the young plant for an asparagus-like treat.
gardening

The cottage by the Cranelake said…
I have heard that Fiddleheads are delicious but I haven't tried them myself.

I do like ferns and every now and again I buy some I've never tried before but they tend not to be hardy enough and only last a year or two. The ones growing here naturally though works great :-)

I learned a lot today! and now I need to find what our folklore says about ferns :-)

Debra She Who Seeks said…
That's more fern lore than I've ever seen before! I've never eaten fiddleheads although they are a great regional delicacy in the Canadian maritimes.
June 24, 2018 at 7:51 AM

Leanna said…
Awesome post. Great folklore too. I love ferns and I'm trying to talk David into getting some ferns for the front gardens because during summer the flowers are done and the gardens look so bare.
June 24, 2018 at 10:10 AM

Guillaume said…
I love plants that are full of symbolism and folkloric significance.
June 24, 2018 at 2:28 PM

1st Man said…
Ferns are hit and miss in these parts. We do have a really shaded area, maybe I should stick a few in the ground and see what happens. Fascinating history to them!
June 24, 2018 at 3:45 PM

kt said…
I have lots of ferns that just appear wherever they want. Especially in the shady areas. Love them! And love fiddleheads in the spring too!
June 24, 2018 at 4:05 PM

NanaDiana said…
I love the information about ferns. How interesting. My grandmother used to use the roots of some ferns for something but I am not sure how she used them. She was an herbalist and I still have her "receipt" book. xo Diana
June 24, 2018 at 6:41 PM